A Holocaust Memorial was dedicated on May 3, 1998, by the City of Madison. Overlooking Lake Mendota in Marshall Park on Allen Boulevard, the memorial was donated by Ellen Shoshany Kaim. The memorial consists of a large boulder, two benches, and a railing. The inscription on the boulder reads: "To honor the memory of the six million Jews and all victims of the Holocaust, 1941-1945"

Read more about the memorial and donor in Plaques and People, Chicago Tribune, April 19, 1998. 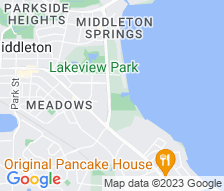