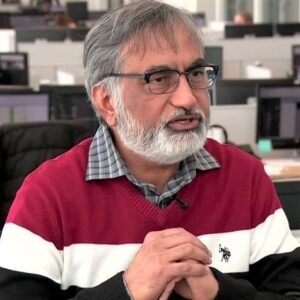 ​About Masood Akhtar
Masood Akhtar is an Indian-born proud American Muslim entrepreneur and an activist. Akhtar has been living in Madison for over 30 years.

Akhtar has founded and led multiple businesses and has also been actively involved with numerous community projects. One of Akhtar’s most visible efforts is a statewide, non-partisan Movement he founded called We Are Many - United Against Hate with a focus on teaching forgiveness and peace, addressing the root causes of hate, bigotry, and racism, and building inclusive communities while empowering youth. Akhtar’s Movement is not about us vs. them.

Since economic insecurity is becoming a breeding ground for hate and a recruiting tool for hate groups, Akhtar has also started “Empowering Students for Success” organization to provide interest-free loan and mentors to students from low- and medium-income families to get higher education.

Akhtar is also a frequent keynote speaker/panelist/columnist/guest on TV shows.

In 2017, Akhtar was awarded “Certificate of Appreciation” by the Southern Poverty Law Center and his name has been added to the Wall of Tolerance in Montgomery, Alabama, to provide inspiration to all those who choose to take a stand against hatred.

In 2019, Akhtar received “Certificate of Achievement” from Wisconsin Governor Tony Evers that states “all Wisconsinites should be inspired by Masood’s work and strive to unite together regardless of differences and seek to build a state and a country that is united against hate, bigotry, and racism.

In 2019, Akhtar was presented with “2019 Manfred E. Swarsensky Humanitarian Service Award” by the Rotary Club of Madison.

In 2019, Akhtar was appointed on the Board of Friends of PBS Wisconsin.

In 2020, Akhtar was named one of Wisconsin’s 48 most influential Asian American Leaders.

Source for About Masood Akhtar: https://www.united-against-hate.org/board-of-directors/

About the Community Forum Series
For many years, the Jewish Federation of Madison hosted the Jewish Business and Professional Roundtable (JBPR) at Nakoma Golf Club. After a lapse, and under current gathering restrictions due to COVID-19, we would like to announce a new virtual program offering inspired by the JBPR series, the Community Forum.

The forum will include four programs between the fall of 2020 and into the spring of 2021. All community members, not just our business leaders, are invited to engage in these programs about important topics presented by interesting people both in the Jewish and non-Jewish communities. We hope the presentations will educate, inform, and inspire participants to be more aware and involved in issues concerning our local community.

For now, each program will be presented live via Zoom and will be about one hour.