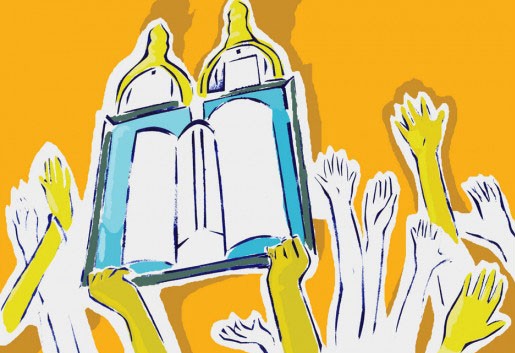 Integral to all the festivals on the Jewish calendar – Passover, Shavuot, and Sukkot – is the mitzvah to rejoice. "Rejoice on your festivals!" the Torah enjoins us. Of all the festivals, however, only Sukkot is described as "the season of our rejoicing," because the joy of Sukkot eclipses the joy of the other festivals. And then there's the utterly unbridled joy of Shemini Atzeret and Simchat Torah (This year celebrated Oct. 9 - 11), which surpasses even the joy of Sukkot.

Let's talk about this joy. Let's start with an analogy. Three men were discussing the joys of wedded life.

All agree that Yosef loves his wife.

Not to be outdone, Dovid said: "I also do everything my wife asks me to do. In fact, she doesn't even have to spell out what she wants. It's enough that she says, 'Whew! That garbage bag is sure smelling up the kitchen!' for me to understand that she wants me to take out the garbage. Which I do, of course."

All agreed that Dovid loves his spouse even more.

But in the end it turned out that Moshe's marriage was the most loving of all. Moshe's wife doesn't have to ask her husband to do things for her. She doesn't even have to drop hints. Moshe explained, "I just know that she wants me to take out the garbage, I just know what she wants me to do for her, and I do it." The Holiday month of Tishrei is replete with mitzvot—full of opportunities for carrying out G‑d's will. For more than three weeks, our days are filled with praying, repenting, fasting, feasting, dancing, building a sukkah, acquiring a set of Four Kinds, and dozens of other mitzvot, customs and observances.

The observances of Tishrei fall under three general categories. There are biblical precepts that are explicitly commanded in the Torah, such as sounding the shofar on Rosh HaShanah, fasting on Yom Kippur or eating in the sukkah on Sukkot. There are also a number of rabbinical mitzvot—observances instituted by the prophets and the sages by the authority vested in them by the Torah. For example, the five prayer services held on Yom Kippur and the taking of the Four Kinds on all but the first day of Sukkot are rabbinical institutions.

Finally, the month of Tishrei has many minhagim or customs—such as eating an apple dipped in honey on the first night of Rosh HaShanah. The minhagim are not mandated by biblical or rabbinical law, but by force of custom: these are things that we Jews have initiated ourselves as ways to enhance our service of our Creator.

Most amazingly, the climax of the month of Tishrei—the point at which our celebration of our bond with G‑d attains the very pinnacle of joy—is during the hakafot of Simchat Torah, when we take the Torah scrolls in our arms and dance with them around the reading table in the synagogue—a practice that is neither a biblical nor a rabbinical precept, but merely a custom.

For it is with our observance of the minhagim (customs) that we express the depth of our love for G‑d. The biblical commandments might be compared to the explicitly expressed desires between two people bound in marriage. The rabbinical mitzvot, on which G‑d did not directly instruct us but which nevertheless constitute expressions of the divine will, resemble the implied requests between spouses.

But the minhagim (customs) represent those areas in which we intuitively sense how we might cause G‑d pleasure. We wear our Yarmulkas/Kippas proudly, make the Hamotzi on two loaves of Challah on Friday night, and fill our shelves with Torah books, and in these lie our greatest joy.

May we all realize our intense bond with G-d to its fullest potential, in recognizing our integral part of the master plan, and we should all be blessed with all good things spiritually and materially, and most importantly with the coming of Moshiach, may it be now.

Rabbi Avremel Matusof is a Madison native. He received his rabbinic ordination at the Rabbinic Talmudic College in NYC. Rabbi Avremel has traveled extensively to bring hope and direction to smaller communities, including: Namibia, Ghana, China, Dominica, and Kauai, Hawaii. He moved back to the area with his wife, Chaya Mushka in the summer of 2011 as Director of the Young Jewish Professionals program (a Chabad of Madison affiliate), serving the growing professional population of the area.