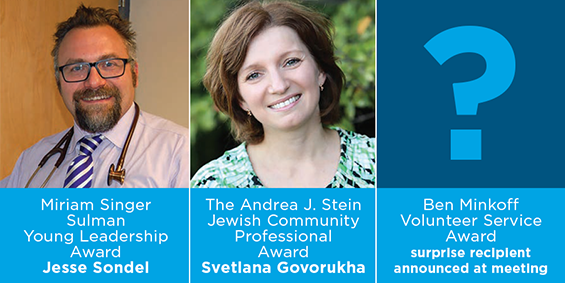 Miriam Singer Sulman Young Leadership Award ~ Jesse Sondel
Local veterinarian and community leader, Dr. Jesse Sondel will receive the Jewish Federation of Madison’s 2017 Miriam Singer Sulman Young Leaders award in recognition for the numerous hours he devotes to serving the Federation and other local organizations. Jesse announced to his parents Sherrie and Paul at age seven that he would become a veterinarian, a path he pursued diligently throughout his formative years by raising a variety of animals. He received his degree in Veterinary Medicine from the University of Wisconsin in 2003 and now is head of a private veterinary practice in Madison.

Jesse is a proud alum of the Federation’s Gan HaYeled preschool program, Camp Shalom and Midrasha programs. Jesse was a camper and counselor at Camp Interlaken for fifteen summers where he came to know the young woman who became his wife Emilie. Jesse was a longtime hockey player and has passed the love of the game onto his daughter Jordan whom he now coaches along with her teammates. He is also a caring dad to his son Evan. Jesse volunteers for the local Humane Society, extending his caring for animals to assisting in providing medical care to rescued animals.

Jesse has served on many Jewish Federation of Madison committees, most recently serving as chair of the nominating committee. He is always willing to help anyone in need, whether, furry, feathery or human. Miriam Singer Sulman was a much admired, dynamic young leader. In addition to the recognition given to the recipient of the Miriam Singer Sulman award, the endowed fund, established by Miriam’s parents Isadore and Ida, enables the recipient to attend the Jewish Federations of North America’s General Assembly.

A native of St. Petersburg Russia, Svetlana studied at the State University of Economics and Finance. Before leaving St. Petersburg, she worked for Gillette in the finance department.

Svetlana arrived in Madison with her husband Alex and their son Viktor on Viktor’s fifth birthday, June 4, 2001. They welcomed Dmitriy to their family two years later.

Svetlana joined the Jewish Federation of Madison in 2005 and took over as the finance director in 2007. She manages all financial operations for Federation and is known for her warmth, professionalism, and her dedication to detail, as she tackles the daily challenges of running the financials for a not-for-profit organization. In the evenings she manages the finances of her family’s business, Steam Plus, which is now a Camp Shalom Scholarship Fund sponsor. When they first arrived in Madison, Svetlana’s family was grateful to be a beneficiary of the scholarship fund for the camp. Today she pays it forward by helping ensure the scholarships continue to benefit those in need.

Both of her sons enjoyed and treasured many years at Camp Shalom. Viktor will graduate in December from UWMadison while Dmitriy (a Gan HaYeled alumnus) is in his freshman year at Waunakee High School and looks forward to becoming a counselor at Camp Shalom next year.

Svetlana is bright, hard-working, passionate, committed to this community, and is always willing to do whatever it takes to keep Federation and its affiliate agencies and programs running smoothly.

Ben Minkoff Volunteer Service Award ~ ???
The surprise award recipient will be announced at the Annual Meeting