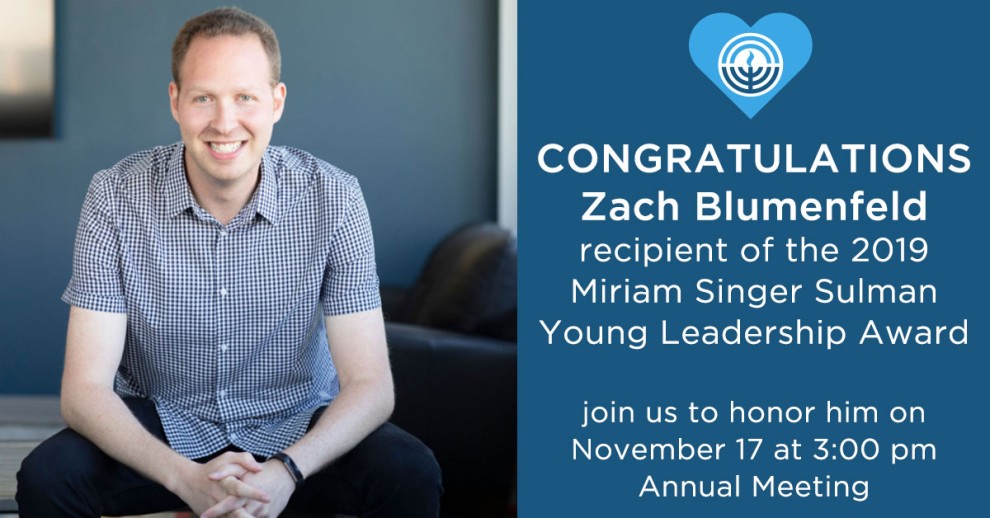 Zach Blumenfeld was born and raised in Madison with strong roots in the Jewish community. As a youth, he led the Temple Beth El Youth Group as President, before serving as a Regional Vice President for the North American Federation of Temple Youth (NFTY). He studied sports management and graduated from the University of Minnesota, although he is a die-hard Badger fan. Zach is a serial entrepreneur and currently works at SafetyNet, an innovation center focusing on financial wellness. Zach is also the founder of CultureCon, an organization with a mission to connect humans to inspire positive change around organizational culture, as well as a founder of numerous other startups.

Zach is a very active participant in the community. His involvement with the Jewish Federation of Madison includes serving on the board of directors, Singles, Professionals and Families Committee, Israel and Overseas Panel, and chair of Partnership2Gether (P2G). During his time as chair of P2G, he planned a variety of programs to strengthen our relationship with Israel, including a Reverse Birthright trip. In addition to his participation with the Jewish Federation of Madison, he serves on the board of Madison Memorial Youth Basketball and spent five years coaching youth basketball in the program. He is a board member of Raise The Standard (RTS), which helps steer high school youth towards a brighter future through mentorship and real-world education that aims to ignite new goals and passions. He was a candidate for the Leukemia & Lymphoma Society’s Man of the Year, where he helped raise over $133,000 during the 10-week campaign. Zach also volunteers with numerous organizations including StartingBlock, M List: Diversity & Inclusion Awards Committee, and Summit Credit Union.

In his spare time, Zach loves to travel the world and all things sports (Go Badgers!). You can find him on Twitter at @ZachBlum or on LinkedIn.

2021-2022 Budget Passed by Jewish Federation of Madison Board

A Message To Our Community From Our President